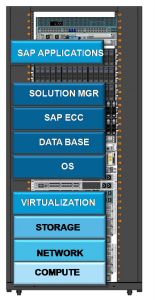 Ascend has a strong SAP practice and has been helping customers with SAP infrastructure sizing, deployment and integration services for over ten years. During the process Ascend has developed a strong echo system of partners covering the entire stack from hardware all the way to applications that helps it provide SAP Infrastructure solutions and services customized and specific to the needs of the Customer. In addition to providing the Infrastructure, Ascend provides SAP Basis, Solution Manager installation and integration and SAP Basis Administration and monitoring services and solutions.
SAP Infrastructures get significantly complex as it scales and customers are often faced with the challenge of working with various vendors for Hardware, Software, OS, SAP Basis and SolMgr services. Ascend’s partnership and echo system provides customers the unique option of working with a single vendor all the way to their SAP Applications.

Ascend realized that the integration and putting all the infrastructure pieces together for SAP applications was very cumberson and the customers faced significant challenges at the time of roll outs. Specific expertise will have to be called in to support and resolve those issues. Based on continuous requirements from customers Ascend has established the relationships with the following:

Traditionally most of the large scale SAP deployments preferred Oracle as a Database. Ascend has established the relationships with the following:

Ascend is being recognized as a go to partner for SAP solutions by customers and its echo system partners alike.With that view Ascend is leading major initiatives that establish it as a leader in the following:

Ascend has been providing services to its customers in the following:

For a discussion on your SAP initiatives, please call 1-888-782-2361 ext 101 or email at info@ascendtechnologies.net. Our SAP experts will be more than glad to help you.